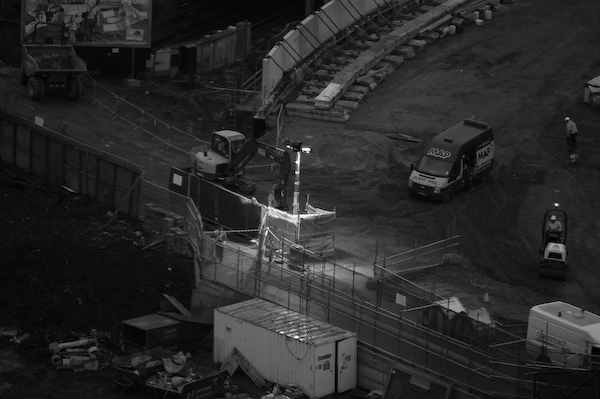 Psychogeography has always been as much about time as it has been about space. As Ivan Chtcheglov had it: ‘all cities are geological; you cannot take three steps without encountering ghosts bearing all the prestige of their legends.’[1] In cities, the spatial orders of various eras are superimposed upon one another with no regard for temporal succession. Within the City of London, for example, glass towers jostle for position within the confines of a medieval street pattern, whilst a short distance away in Hackney or Islington it is not unusual to find Georgian town houses abutting 1960s municipal housing and contemporary ‘luxury’ apartments.

The lesson that the Situationists drew from such juxtapositions was that the technologies of spatial construction developed through history could be appropriated for the creation of a city whose guiding principles would be freedom and desire rather than labour and consumption. In Situationist psychogeography, the spaces of history become the materials from which an un-alienated space might be constructed, and in this they looked to the past for the materials from which they might build a different future.

Late capitalist culture and politics conducts its affairs in a relentless present tense. Historical images circulate within an economy of signs which cannot itself articulate the present’s relationship with the past as history. In The Society of the Spectacle, Guy Debord noted that the motto of the ‘new town’ might be: “On this spot nothing will ever happen – and nothing ever has.”’[2] British literary psychogeography has often discovered similar insights. In London Orbital, Iain Sinclair explored similar amnesiac territories in the hinterlands of London’s M25. Coming across ‘Porters Mansion’, a former manor house converted to luxury flats, he picks up a brochure:

‘For centuries this house and its surrounding estate were a dominant feature of the local landscape and witness to many changes not least its encirclement by Shenley Hospital in the 1930’s … The Mansion has had a fascinating history.’ Has had. Present perfect. History, once again, put in its place. The future all used up.[3]

If Debord’s ‘new town’, at the same time as it overwrites space, overwrites history, Porters Mansion makes much of its historical status, but only insofar as it adds monetary value.

For Debord the point of rediscovering the ability to think historically is to generalise, on the level of both the individual and the collective, not the alienated irreversible time of production or the pseudo-cyclical time of consumption, but a ‘generalized historical life’.[4] British literary psychogeography, if it shares something of the Situationist search for such a time, it does so not at the level of the collective, but as a compensatory activity pursued by bohemians in the margins and interstices of an increasingly encroaching economism. As Patrick Keiller has put it: ‘as individuals, we can’t rebuild the public transport system, or re-empower local democracy, but we can poeticise our relationship with their dilapidation.’[5] It would therefore seem that to rediscover psychogeography as a critical, or perhaps more specifically, anti-capitalist practice, it would also seem to be necessary also to renegotiate its relationship with time.